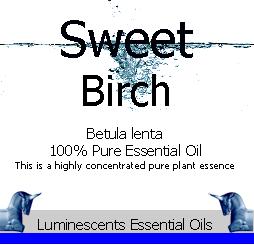 Sweet Birch not to be confused with white birch or birch tar is also and variously known as Black Birch, Cherry Birch, Mahogany Birch, or Spice Birch and is a native to North America and Canada.  Its aroma is often confused with Wintergreen (Gaultheria procumbens) which is now used much more often as its aroma and actions are similar in many respects.

Sweet Birch is anti inflammatory so is often used in rheumatism and joint pain therapies. It is also astringent so is used for scaly skin conditions. As a result it has historical use as being good for treating psoriasis, eczema, gout, ulcers, and broken bones. It is mildly diuretic.

CAUTIONS: Use sparingly on the skin and as with all essential oils, well diluted. Large dosages may cause skin sensitivity and irritation. Not suitable for the very young because of its naturally occurring constituents, methylsalicylate, betulin and betulinic acid .