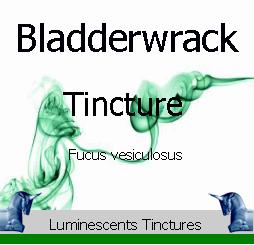 Bladderwrack (Fucus vesiculosusis), from which Bladderwrack Tincture is extracted, is a seaweed found on the coasts of the North Sea, the western Baltic Sea, and the Atlantic and Pacific Oceans, also known by the common names Black Tang, Rockweed, Bladder Fucus, Sea Oak, Black Tany, Cut Weed and Rock Wrack.