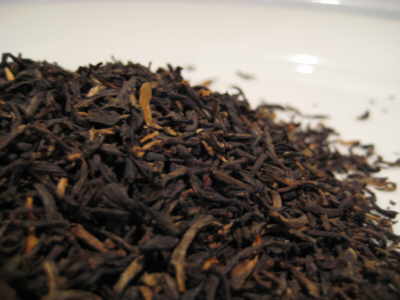 China Yunnan Flowery Orange Pekoe (FOP) is a distinctive tea with a clear, penetrating flavour and a bright golden colour.

Yunnan is located in the far south west of the China . It spans approximately 394,000 square kilometres (152,000 sq mi) and has a population of 45.7 million (2009). The capital of the province is Kunming which was formerly also known as Yunnan. The province borders the countries of Vietnam, Burma and Laos. Yunnan is situated in a mountainous area, with high elevations in the northwest and low elevations in the southeast.

In 2016, the discovery of the earliest known physical evidence of tea  in China came from the mausoleum of Emperor Jing of Han in Xi’an which gave a clue that tea made from the Camellia sinensis (the tea bush) was consumed by Han dynasty Emperors as early as the second century BC.  Of course there are many scholarly works that describe some kind of infusion that might have been a tea made from Camellia sinensis going back at least a thousand years before the Han dynasty but will we ever know exactly how the practice of tea drinking originated?