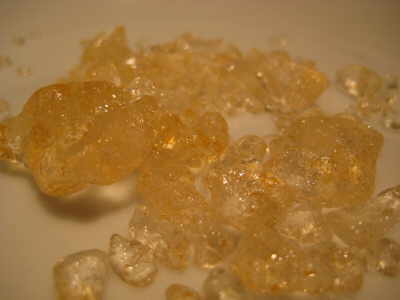 Thymol can be harmful if swallowed, inhaled or absorbed through the skin in its raw crystal form. It is far too strong. It is an eye, skin, and respiratory irritant.

Thymol is described as large, amber coloured, translucent crystals of the hexagonal system that have an aromatic, thyme-like odour, and a pungent, aromatic taste.

Thymol is used as an antiseptic, local anaesthetic, cooling agent, and as a preservative. It acts as a local irritant and anaesthetic to the skin and mucous membrane. It is found in liniments, lip balms, toothpaste, and especially mouthwash. It is not compatible with strong oxidizing agents, organic materials, or strong bases.

It has been found to be useful in controlling varroa mites in bee colonies. A minor use is in bookbinding: before rebinding, books with mould damage can be sealed in bags with thymol crystals to kill fungal spores. It is also used as a preservative in halothane, an anaesthetic. In a 1994 report released by five top cigarette companies, thymol was listed as one of 599 additives to cigarettes. It is added to improve the flavour.