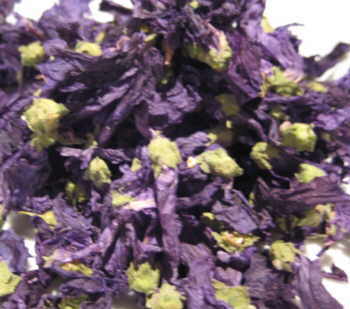 For centuries Blue Mallow Flowers (Malva sylvestris) were laid down in front of dwellings or worn as a garland for Mayday/Beltane celebrations in England.

These flowers do not have a fragrance.

Blue Mallow Flowers aid and promote spiritual healing and peace. They can be incorporated into a dream pillow for soothing of nightmares or drunk as a tea or added to a bath to soften one’s character. A very becoming and pleasing Venus or Dark of the Moon ink can be made from Blue Mallow Flowers.