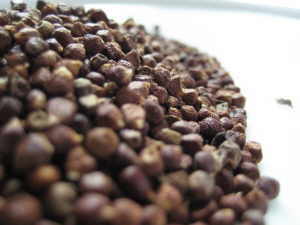 Afromomum meleguetta from which Grains of Paradise comes is a species in the ginger family, Zingiberaceae.

It is a West African spice that gives a pungent, peppery flavour with a hint of citrus. The plant is a herbaceous perennial, native to swampy habitats along the West African coast. Its trumpet-shaped, purple flowers develop into 5 to 7 cm long pods containing numerous small, reddish-brown seeds.

The seeds have a pungent, peppery taste due to aromatic ketones. It is also known as Ossame, Melegueta pepper, Alligator Pepper, Guinea Grains, or Guinea pepper.

Uses for Grains of Paradise:-

Grains of Paradise are commonly employed in the cooking styles of West Africa and North Africa, where they have been traditionally imported via caravan routes through the Sahara desert. The rare spice became a very fashionable substitute for black pepper in 14th and 15th century Europe, especially in northern France, one of the most populous regions in Europe at the time. In the early modern period, the craze for the spice waned and it became more common as a flavour ingredient for sausages and beer.

Today it is largely unknown outside of West and North Africa except as a flavour in some beers, gins and Norwegian acquavit.

History of Grains of Paradise:-

In 1469, King Afonso V of Portugal granted a monopoly on the trade in the Gulf of Guinea to a merchant from Lisbon by the name of Fernão Gomes, including the exclusive trade of Aframomum melegueta, which was called Malagueta Pepper at that time – and who was granted with 100,000 Real-per annum in exchange for exploring 100 miles of the coast of Africa a year for five years.

After Christopher Columbus reached the New World in 1492 and brought the first samples of Capsicum frutescens, the name malagueta was then given to the newly discovered Chilli pepper. Malagueta, thanks to its low price, remained popular in Europe even after the Portuguese opened the direct maritime route to the Spice Islands around 1500.

The importance of the spice at the time is recognised by the designation of the area from the St. Johns River (present day Buchanan) to Harper in Liberia as the Grain Coast honouring the availability of grains of paradise. Later, the popularity for the spice waned, and its uses were reduced to a flavoring for sausages and beer. In the 18th century, its importation to Great Britain collapsed after a Parliamentary act of George III forbade its use in malt liquor, aqua vita, and cordials.  In 1855, England imported about 15,000 to 19,000 lbs per year but by 1880.