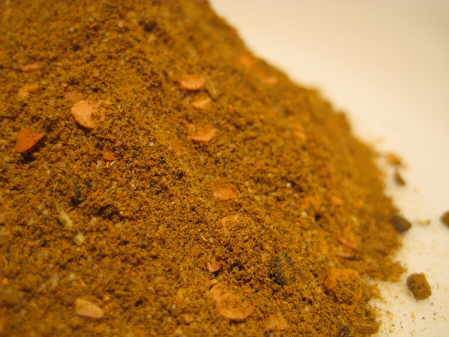 Hawayij also, and variously known as Hawayej or Hawaij, is the name given to a variety of Yemeni ground spice mixtures used primarily for soups, vegetable stews and meat rubs and as a spicy flavouring for coffee.

The recipe for the mix varies in different parts of the country and is often dependent upon the purpose of the blend, whether it is for flavouring tea or coffee or as a spice blend for soups and stews. Generally speaking the latter will almost always have ground and sometimes whole lentils in the blend which is the natural thickening agent employed.

Hawayij is used extensively by Yemenite Jews in Israel and its use has spread more widely into Israeli cuisine as a result. Hawayij is primarily a peppery spice mixture from the Yemen. It is a mixture made up typically of black peppercorns, caraway seeds, cumin, cardamom, saffron, and turmeric, sometimes cloves, nutmeg and cinnamon and coriander seed is added and it is used in many Yemeni dishes particularly in soups, grilled meats, and vegetable dishes and, surprisingly, for flavouring coffee although sometimes ingredients are left out or substituted for a coffee mix such as ginger and fennel seed added along with a touch of aniseed.

When used for Tea the ginger is often left out. Lovers of Indian Spiced Chai sometimes know this as an Arabic version of the tea made with milk rather than water ans highly sweetened. It is really not at all  surprising given that both Yemen and India were stops on the ancient trade routes that there are many similarities in shared culinary cultural heritage.

The Saffron content contributes largely to its expense sadly but its well worth a try for all that.