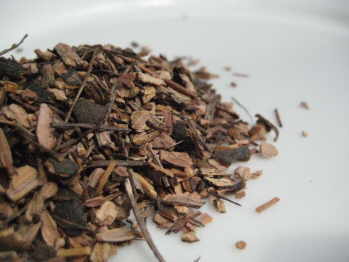 Smilax aristolochiifolia (medica) not to be confused with Smilax officinalis

Mexican Sarsaparilla Root (Smilax aristolochiifolia or sometimes Smilax medica and other closely related species of Smilax) is a perennial trailing vine with prickly stems. Its name (which is zarzaparrilla in Spanish) comes from the Spanish words zarza for “shrub” and parrilla for “little grape vine.”

This particular plant (different from and not to be confused with Smilax officinalis and also somewhat rarer) is also known as Gray Sarsaparilla, Smilax, Smilace, Sarsa, Catbriers, Greenbriers, Prickly-Ivys and Khao Yen and this particular plant is indiginous to Mexico ( as its name so clearly suggests ) and now widely found across the Central Americas

Mexican Sarsaparilla root has been used ( as its cousin Smilax officinalis has ) for centuries by the indigenous peoples of Central and South America for sexual impotence, rheumatism, skin ailments, and as a general tonic for physical weakness. It has long been used by tribes in Peru and Honduras for headaches and joint pain, and against the common cold.