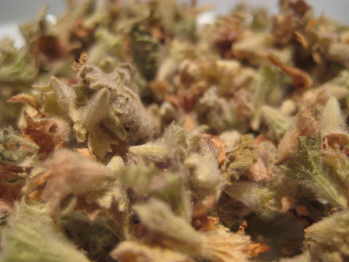 White Horehound (Marrubium vulgare) is an erect mint-like plant which grows all over the United Kingdom and is also widely known in mainland Europe, central and northern Asia, and scattered throughout North America.

The plant is thickly covered in white fur, has a thick stem, and grows up to around 60cm. The circular to broadly ovate wrinkled leaves, 15-40mm long, are bluntly toothed at the margins. The upper surface is greyish and less hairy than the lower surface. Dense whorls of off-white flowers, about 15mm long, are found in the axils of paired, leaf-like bracts The calyx tube has ten tiny hooked teeth at the rim. Marrubium flowers between April and October and typically inhabits roadsides and waste places.

It is also known sometimes as Houndsbane, Marrubium, Eye of the Star, Seed of Horus, Marvel, & Bulls’ Blood

White Horehound is one of the oldest and most reliable cough remedies known. It is an expectorant. It has been in constant use since the time of the Egyptian pharaohs. It is one of the bitter herbs ordained to be eaten at Passover supper by the Jews (the Hebrew word marrob means ‘bitter juice’). Gerard recommended it for the bites of serpents and mad dogs. The Navajo Indians give mothers a decoction of the root before and after childbirth.

Traditionally it would be taken as a ptisiane or infusion ( 2 or 3 spoonfuls brewed in one drinkable measure) for colds but can also be made into a syrup for coughs by boiling the dried herb with sugar at around 30 to 40 grams of the herb to half a litre of water. In large doses the herb acts as a gentle purgative and the dried green herb has been used as a vermifuge. In folklore the green leaves of the plant, boiled in lard and then left to solidify was used as an ointment for minor wounds. Today we tend to use petroleum jelly rather than lard!