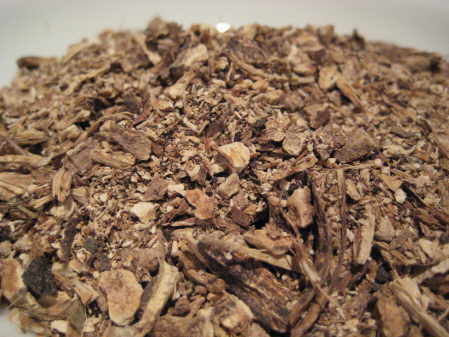 Elecampane (Inula helenium) is a perennial plant common in many parts of The United Kingdom and ranges throughout central and Southern Europe, and in Asia as far eastwards as the Himalayas. It is also known as Horse-heal, Velvet Dock, Scabwort, Yellow Starwort, Alant, Elfdock, Wild Sunflower, Elfwort or Marchalan

It is a rather rigid herb, the stem of which attains a height of from 3 to 5 feet; the leaves are large and toothed, the lower ones stalked, the rest embracing the stem; the flowers are yellow, 2 inches broad, and have many rays, each three-notched at the extremity. The root is thick, branching and mucilaginous, and has a warm, bitter taste and a pleasant but only slight camphoraceous odour.

Elecampane root was employed both as a medicine and as a condiment, and in England it was formerly in great repute as an aromatic tonic and stimulant of the secretory organs. As a drug, however, the root is now seldom used except in veterinary practice, though it is undoubtedly possessed of antiseptic properties.

The root was once boiled in sugar and sold as a sweet in Medieval time.

The plant’s volatile ingredients, Inulin and Helenin are both freely soluble in alcohol rather than water.

It is an expectorant, anti-tussive, diaphoretic, hepatic, and anti-microbial.

In France and Switzerland it is still used in the manufacture of absinthe.

John Gerard recommended elecampane for “the shortness of breath”; today herbalists prescribe it as an expectorant and for water retention; it also is claimed to have antiseptic properties. It has minor applications as a tonic and to bring on menstruation

The plant’s specific name, helenium, derives from Helen of Troy; It is said to have sprung up from where her tears fell. It was sacred to the ancient Celts, and once had the name elfwort