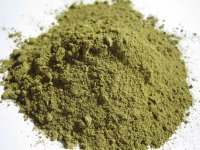 Henna  is a flowering plant, the sole species in the genus Lawsonia in the family Lythraceae. It is native to tropical and subtropical regions of Africa, southern Asia and northern Australasia with an arid or at least seasonally dry climate.

Henna, lawsonia inermis, is a plant with a red-orange dye molecule, lawsone. This molecule has an affinity for bonding with protein, and thus has been used to dye skin, hair, fingernails, leather, silk and wool. Henna’s indigenous zone is the tropical savannah and tropical arid zone, in latitudes between 15° and 25° N and S from Africa to the western Pacific rim, and produces highest dye content in temperatures between 35 C and 45C. It does not thrive where minimum temperatures are below 11C. Temperatures below 5C will kill the henna plant. The dye molecule, lawsone, is primarily in the leaves, and is in the highest levels in the petioles of the leaf.

How to use for hair treatment

Mix half a teaspoon of cooking oil with warm water and henna powder to make a paste. Warm over a pan of water for around 1 hour stirring constantly and then leave to cool (preferably overnight)

Apply to hair and massage in. Wrap your scalp in clingfilm and a warm towel and leave for around 20 mins. Rinse well and shampoo as normal.

Not recommended for already coloured or treated hair

Henna is commercially cultivated in western India, Pakistan, Iran, Yemen, Morocco and Sudan. Though henna has been used for body art and hair dye since the Bronze Age, henna has had a recent renaissance in body art due to improvements in cultivation, processing, and the diasporas of people from traditional henna using regions.

Henna is the Arabic word for henna, cognate of the Semitic root HNA for Red, and the word for “emotional tenderness”, but the earlier known words for henna are KPR and PKR, words in ancient Egyptian medical records, Canaanite and Hebrew texts. In the Bible Song of Songs and Song of Solomon, henna is referred to as Camphire. In the Indian subcontinent, there are many variant words such as mendee Mehndi (or Mehendi/Mehandi) in India, Pakistan and Bangladesh. In Arabic-speaking countries in North Africa and the Middle East the Arabic word henna (or a variant such as Kina or hinna) is used.

In Tamil (South India, Singapore, Malaysia, Sri Lanka) it is called ‘Marudhaani’, and used as ground fresh leaves rather than as dried powder.

Henna has many traditional and commercial uses, the most common being as a dye for hair, skin and fingernails, a dye and preservative for leather and cloth, and as an anti-fungal. Henna was used as a hair dye in Indian court records around 400 CE, in Rome during the Roman Empire, and in Spain during Convivienca. It was listed in the medical texts of the Ebers Papyrus (16th c BCE Egypt) and by Ibn Qayyim al-Jawziyya (14th c CE (Syria and Egypt) as a medicinal herb. In Morocco, wool is dyed and ornamented with henna, as are drumheads and other leather goods. Henna will repel some insect pests and mildew.

The United States Food and Drug Administration has not approved henna for direct application to the skin. It is unconditionally approved as a hair dye, and can only be imported for that purpose. See: FDA regulations for henna as hair dye. Henna imported into the USA which appears to be for use as body art is subject to seizure, and at present it is illegal to use henna for body art in the US though prosecution is rare.

IMPORTANT – PLEASE READ:- There are no such plants as black henna or neutral henna: products sold as such may be indigo or cassia, and may contain unlisted dyes and chemicals.

The fast black stains of black henna are not made with henna at all, but are from paraphenylenediamine. This can cause severe allergic reactions, and permanent scarring. No henna can make a black stain on a torso in ½ hour. Only para-phenylenediamine can stain skin black quickly, and the FDA specifically forbids PPD to be used for that purpose.

In the 1990s, henna artists in Africa, India, the Arabian Peninsula and the West began to experiment with para-phenylenediamine based black hair dye, applying it as a thick paste as they would apply henna, in an effort to find something that would quickly make jet black temporary body art. PPD (para-phenylenediamine) can cause severe allergic reactions, with blistering, intense itching, permanent scarring, and permanent chemical sensitivities. Estimates of allergic reactions range between 3% and 15%. Henna does not cause these injuries.

Para-phenylenediamine is illegal for use on skin in western countries, though enforcement is lax. When used in hair dye, the PPD amount must be below 6%, and application instructions warn that the dye not touch the scalp and the dye must be quickly rinsed away. Black henna pastes have PPD percentages from 10% to 60%, and are left on the skin for half an hour.

Para-phenylenediamine black henna use is widespread, particularly in tourist areas. Because the blistering reaction appears 3 to 12 days after the application, most tourists have left and do not return to show how much damage the artist has done. This permits the artists to continue injuring others, unaware they are causing severe injuries. The high profit margins of black henna and the demand for body art that emulates tribal tattoos further encourage artists to ignore the dangers. It is not difficult to recognize and avoid para-phenylenediamine black henna:

Anyone who has an itching and blistering reaction to a black body stain should go to a doctor, and report that they have had an application of para-phenylenediamine to their skin.

PPD sensitivity is life-long and once sensitised, the use of synthetic hair dye can be life threatening. These injuries are NOT caused by henna, and a person can use henna as hair dye.

Henna body art is made by applying henna paste to skin: the lawsone in the paste migrates into the outermost layer of the skin and makes a red-brown stain.

Whole, unbroken henna leaves will not stain the skin. Henna will not stain skin until the lawsone molecules are made available (released) from the henna leaf. Fresh henna leaves will stain the skin if they are smashed with a mildly acidic liquid. This will stain skin within moments, but it is difficult to form intricate patterns from coarse crushed leaves. Dried ground, sifted henna leaves are easily worked into a paste that can used to make intricate body art. Commercially available henna powder is made by drying the henna leaves and milling them to powder, then the powder is sifted. This powder is mixed with lemon juice, strong tea, or other mildly acidic liquids. Essential oils with high levels of “terps”, monoterpene alcohols such as tea tree, eucalyptus, cajeput, or lavender will improve skin stain characteristics. The henna mix must rest for 4 to 12 hours so the leaf cellulose is dissolved, making the lawsone available to stain the skin. This is mixed to a toothpaste consistency and applied with a one of many traditional tools, including resist techniques, shading techniques, and thicker paste techniques, or the modern cellowrap cone.

Once applied to the skin, lawsone molecules gradually migrate from the henna paste into the outer layer of the skin. Though henna’s lawsone will stain the skin within minutes, the longer you leave the paste on the skin, the more lawsone will migrate. Henna paste will yield as much dye as the skin can easily absorb in less than eight hours. Henna tends to crack and fall off the skin during these hours, so it is often sealed down by dabbing a sugar/lemon mix over the dried paste, or simply adding some form of sugar to the paste.

When the paste has fallen off the skin or been removed by scraping, the stain will be orange, but should darken over the following three days to a reddish brown. Soles and palms have the thickest layer of skin and so take up the most lawsone, and take it to the greatest depth, so that hands and feet will have the darkest and most long-lasting stains. Steaming or warming the henna pattern will darken the stain, either during the time the paste is still on the skin, or after the paste has been removed. Chlorinated water and soaps may spoil the darkening process: alkaline may hasten the darkening process. After the stain reaches its peak colour it will appear to fade. The henna stain is not actually fading, the skin is exfoliating: the lower, less stained cells, rise to the surface, until all stained cells are shed.