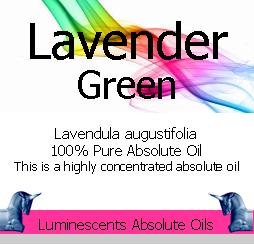 Lavender is an evergreen woody shrub, up to 1 meter tall, with pale green, narrow linear leaves and violet blue flowers.

Lavender is credited with being an analgesic, anticonvulsive, antidepressant, antiphlogistic, antirheumatic, antseptic, antispasmodic, antiviral, bactericide, carminative, cholagogue, cicatrisant, cordial, cytophylactic, decongestant, deodorant, and as a diuretic. Herbalist regards Lavender as the most useful and versatile essential oil for therapeutic purposes. Lavender is the essential oil most commonly associated with burns and healing of the skin. It also has antiseptic and analgesic properties which will ease the pain of a burn and prevent infection. It also has cytophylactic properties that promote rapid healing and help reduce scarring. Lavender French is a popular choice amongst both aromatherapists and massage therapists for its combination of therapeutic quality and pleasant floral scent.

Lavender absolute’s fine compatibility with most other oils also makes it a popular component in perfumery & cosmetics items.

Although not mentioned in the Bible by the name we recognise it today, it is mentioned frequently by its older name of spikenard. Christian sentiment records the plant to have been taken from the Garden of Eden by Adam and Eve. According to legend the clothing of baby Jesus when laid upon a bush to dry by Mother Mary bestowed the scent. This would probably explain why the plant is also regarded as a holy safeguard against evil. In many Christian houses a cross of lavender was hung over the door for protection.