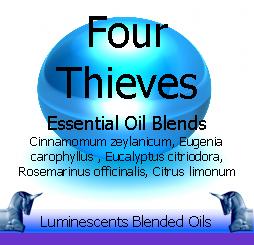 Lemon (Citrus Limonum) has an aroma which is similar to fresh lemon rinds except richer and more concentrated.

Four Thieves Pre Blended Essential Oils is  a carefully combined range of several essential oils specifically balanced for their combined aromatherapy attributes for a particular condition or simply, and more frequently, for their exquisite complimentary fragrances.

Blending is a popular way to enjoy a variety of oils for their attributes and their combined fragrance but its very easy to get the blend wrong by adding a little too much of one or too little of another oil. Pre Blended Essential Oils are expertly blended so that they are always consistent

The oils in Four Thieves Pre Blended Essential Oils are reputed to assist in promoting and enhancing the immune system as well as being antiseptic, anti bacterial and anti viral.

Lemon (Citrus Limonum) has an aroma which is similar to fresh lemon rinds except richer and more concentrated.

This blend should not be used directly on the skin without diluting down as with all essential oils -up to 5 drops in 10 ml of carrier oil will not affect the scent and will “carry” the essential oils safely onto the skin.

There are many variation on the recipe but this is the most frequently used.

Some spice merchants who imported spices, including cinnamon and clove from India during the period of the Black Death and when most international trade was closed down found their businesses under so much pressure that they took to unorthodox measures to support themselves – They turned to crime!

During the plague most people were too scared to associate or socialise let alone help sufferers of the disease within their community – they were afraid to mingle with the dying and scared beyond description to handle the bodies of the dead for disposal.

The eponymous thieves believed that they couldn’t get sick if they used spices that they were familiar with and washed every part of themselves and their clothing in strong vinegar and in so doing they handled the dying and deceased all others feared whilst robbing the victims of the disease of their possessions which they then sold on to create an income to fill the void left by the failure of their legitimate businesses.

They created a lucrative trade in the stolen property but their exploits came to the ears of the authorities and after much planning the King’s Constables set about a plan to capture the miscreants, four of whom they managed to detain and who were threated with execution unless they shared the secrets of their so called immunity.

They shared the secret and avoided execution but not the wrath of the people who survived and the recipe was made public. There is an account of the Thieves Story recorded in the Royal Archives.