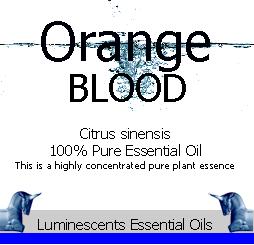 SCENT: Blood Orange Essential Oil has a very sweet citrus smell characteristic of sweet orange, while also carrying some of the bitterness of grapefruit like the bitter orange

The Blood Orange owes its distinctive appearance to a pigment called anthocyanin not typically found in citrus, but common in other red fruits and flowers. Not only is the inside of the orange darkly pigmented, but depending on the variety, the outside may feature dark washes of red. The exact reasons for the unusual inside colour are unknown. However, it seems light, temperature and variety are important contributors.

Blood Orange Essential Oil is used in Aromatherapy to aid with depression, as the aroma releases feelings of warmth and comfort. It is also used for conditions such as insomnia. It is used to fight viruses such as influenza, and aids in the repair of skin tissue. Blood Orange is used for dry skin, however care must be taken when applying to the skin, do not expose the skin to the sun for approximately 1 hour after application as there is the possibility of photosensitivity.

Blood oranges may have originated in either China or the Southern Mediterranean, where they have been grown since the 18th century. They are now the primary orange grown in Italy. The anthocyanins which give the orange its distinct colouring will only develop when temperatures are low at night, as during the Mediterranean Autumn and Winter.  Blood oranges cultivated in the United States are in season from December to March (Texas), and from November to May (California)