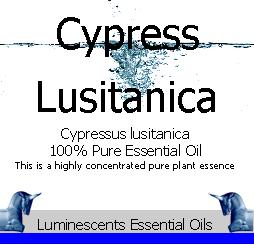 Cypress Lusitanica is a perennial, ovoid or conical-shaped tree that is about 40 meters in height. It is an evergreen with dark or yellowish green foliage, small flowers and globular or oblong greenish cones that turn brown-grey at maturity after pollination with seed nuts inside. The wood is hard and durable, and red-yellow in colour. It is a species of Cypress native to Mexico and Central South America  growing at 1,200–3,000 metres and has been introduced elsewhere.

Aromatherapists also commonly credit the oil with being a relaxing, nerve soothing essential oil. It has the properties of an astringent and has been used in skin care applications.

The scientific name lusitanica (meaning of Portugal) refers to its very early cultivation there, with plants imported from Mexico to the monastery at Buçaco, near Coimbra in Portugal in about 1634; these trees were already over 130 years old when the species was botanically described by Miller in 1768.

The Phoenicians and Cretans used Cypress wood for building ships and homes. The Egyptians used the wood for making sarcophagi (coffins), and the Greeks used it for sculpturing statues of their gods. The Greek word ‘Sempervirens’ means ‘lives forever’ or ever-living. The tree gave its name to the island of Cypress where it used to be worshipped. The legend says the cross of Jesus had been made of cypress wood and it generally seems to be connected with death.