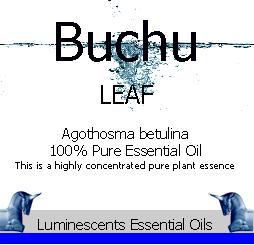 SCENT: Buchu essential oil has a strong, aromatic, blackcurrant-like odour but the oil is redolent of mint / camphor and is strong.

Buchu Leaves (AgothosmaBetulina) from which Buchu Leaf Essential Oil is derived are harvested whilst the plant is in flower and are conspicuously marked with oil glands appearing as pellucid spots. Buchu leaves have a strong odour, resembling pennyroyal, and a corresponding taste. The odour and taste are strongly aromatic, mint-like pungent and very bitter.

The oil is used as an antiseptic and an insecticide.

Native to South Africa, where it is used as a popular flavouring agent to impart a peppermint-like flavour to brandies and wines, it was first used by the Hottentot tribe and it became popular and in wide use throughout Europe and Africa where the dried leaves of Buchu have long been used as a folk remedy for the treatment of almost every known affliction.

Buchu contains ‘barosma champhor’ and other volatile oils which account for its mild diuretic and antiseptic activity. Buchu as a herb is considered to be an extremely safe herb and there are no reported toxic effects. If using for treatment of a urinary tract infection, the only caution would be to have a proper diagnosis of the ailment, since Buchu is completely ineffective in treating sexually transmitted diseases, for which it was once widely thought to be a remedy.