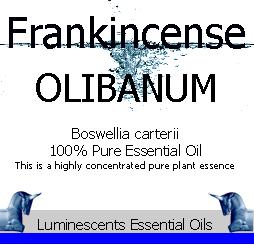 SCENT: Frankincense essential oil has a warm, rich smell with a tang of lemon and woody camphor. It is relaxing, uplifting calming and mildly antiseptic.

COLOUR: Frankincense essential oil has a golden yellow to light brown hue which darkens with age