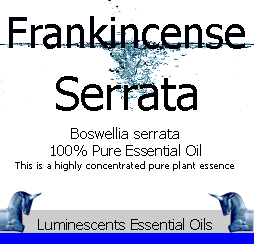 SCENT: The essential oil has a warm, rich smell with a tang of lemon and woody camphor. It is relaxing, uplifting calming and mildly antiseptic.

Boswellia carterii (the Mohr madow tree) –  produced on a commercial scale but nonetheless every bit as good as you would expect.

Boswellia serrata  – THIS PRODUCT – primarily from the Indian subcontinent.