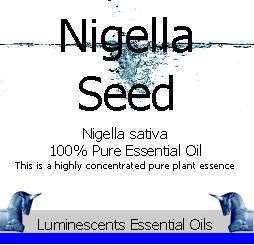 Nigella (this particular oil is wild collected) is an annual plant growing wild all over southern Europe, Asia and North Africa and is cultivated almost everywhere now days. The plant is sometimes known as devil-in-a-bush or love-in-a-mist.

It is used as an insect repellent acting much like mothballs in particular, it is a carminative and stimulant. It helps with bowel disorders and indigestion, calming the stomach and intestines. Some say that it helps to restore a lost sense of smell but I doubt there is any evidence for this. It is reported to be a powerful anti oxidant

It blends quite well with any citrus oil, heavier fixative oils like Vanilla or Sandalwood and Benzoin where it adds a spicy, slightly peppery note.

The seeds have been discovered in ancient Egyptian tombs, particularly Tutankhamen’s tomb and although we don’t know what cultural reasons there might be for this, it shows that they were in use thousands of years ago.

Dioscorides recorded that the seeds were used to treat headache and toothache amongst many other ailments and they are also mentioned in the bible, in the book of Isaiah.