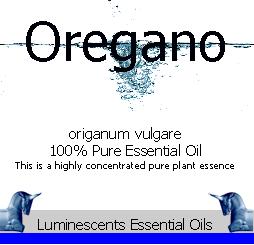 SCENT: Oregano Essential Oil has a has a powerful, spicy, camphor-like aroma.

Wild Oregano (Origanum vulgare) is a hardy, bushy perennial herb that grows up to 90cm (35 in) with a straight stem covered in hair. The leaves are dark green and oval in shape. It will also have a profusion of pink flowers clustered in heads at the top of the branches. It belongs to the mint family. It is a close cousin to Marjoram and in some cultures is known as Wild Marjoram. There are two rare species we have yet to find an essential oil from

Origanum syriaca and Origanum onites, the former, as the name suggests, from Syria and West Asia and the latter from Greece and Turkey.

Research results have showed that volatile oil of Origanum has considerable inhibitory effects against 25 different genera of bacteria including animal and plant pathogens, food poisoning and spoilage bacteria.

There is an interesting side note to Oregano: two things survived the nuclear bomb tests of the 1950s – cockroaches and yeasts. Nonetheless, researchers at Georgetown University proved that oil of Wild Oregano completely destroyed yeasts in petri dishes.

The many different tasting garden varieties are all man made hybrids of Origanum vulgare.

CAUTIONS: Oregano essential oil is both a dermal irritant and a mucous membrane irritant.