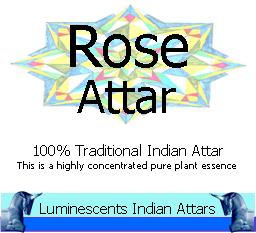 SCENT: Rose Attar, perhaps the best known of all attars, has a honeyed, heady depth to it blended as it is with Sandalwood (Santalum album) and a little Ambar for added sweetness.

Rose Attar, perhaps the best known of all attars, has a honeyed, heady depth to it blended as it is with Sandalwood (Santalum album) and a little Ambar for added sweetness.

Attars, and Rose Attar in particular, by their very nature are expensive – why? The ingredients used are some of the most expensive in the world.

This Rose Attar lasted all day and much of the night on me – Its strong, complex and long lasting.