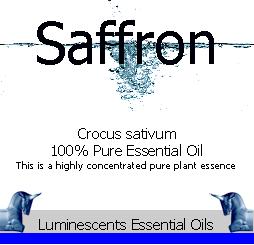 Saffron (Crocus sativum) sometimes spelt Zafran, is a spice derived from the flower of the saffron crocus, a species of crocus in the family Iridaceae.It does not exist in the wild but is thought to have been cultivated in ancient times from the wild crocus ( which is from Crete ) Crocus cartwrightianus

The spice, which has for decades been the world’s most expensive spice by weight, is a native to Southwest Asia. It was first cultivated in the vicinity of Greece.

The following essential oils, American, bastard, false, or dyer’s saffron & Gami Honghwain are often referred to as Saffron but are infact Safflower and not Saffron at all. Alway refer to the latin name to confirm an oil’s genuine provenance.

It is used in the West in perfume  manufacture where it imparts a unique woody and hay like aroma but is also used medicinally as a uterine relaxant and is considered an  aphrodisiac, carminative, cardiotonic, diuretic, diaphoretic, febrifuge, emmenagogue, lactogogue, stimulant, nervine tonic, livotonic, typtic and sedative