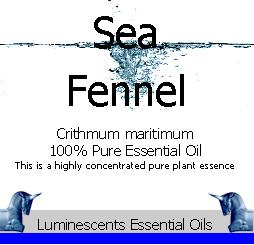 Crithmum maritimum from which Sea Fennel Essential Oil is distilled is also known as Samphire or Rock Samphire.

Samphire is a name also used for several other unrelated species of coastal plant.

The plant is rich in sea mineral salts like potassium, iodine and vitamin C and cosmetic products (of which there are many, made using it) are typically targeted at people with mature skin. It is extremely popular in France.

The Essential oil blends well with all citrus oils, tea tree and eucalyptus

In the 19th century, Sea Fennel was being shipped in barrels filled with sea water from the South  to London markets and was sold as Craest Marine.

In England, it was cultivated as an ornamental in gardens where it is easy to grow liking  a light, rich soil. Obtaining seed commercially is now difficult, and in the United Kingdom the removal of wild plants is illegal under the Wildlife and Countryside Act 1981.

The reclaimed piece of land next to the UK ort of Dover is called Samphire Hoe which is named after rock samphire. The land was created from spoil from the building of the Channel Tunnel and rock samphire used to be harvested from the nearby cliffs.