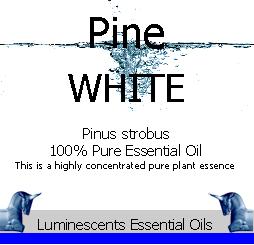 Pinus strobus is a large pine native to eastern North America and and from which this White Pine Essential oil is distilled. It is also called Eastern White Pine, Northern White Pine, Weymouth Pine (after George Weymouth who brought the tree back to Great Britain), and Soft Pine. It is called the Tree of Peace by Native Americans.

It can be found throughout the Great Lakes and Newfoundland along the Appalachian mountains and to some parts of Alabama. It is widely grown as an ornamental in temperate climates

White Pine is analgesic, antibacterial, antifungal, antiseptic, antiviral, and anti-inflammatory. It is primarily used to deodorise, cleanse, disinfect and to freshen. It is  used with respiratory and circulatory disorders when vapourised and for muscle and tissue damage when used in massage.