View basket “Burdock Root Tincture” has been added to your basket. 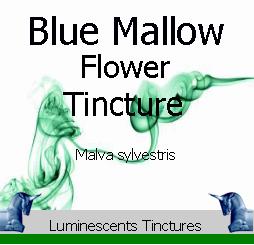 Malva sylvestris from which this Blue Mallow Tincture is extracted has delightful and quite stunningly coloured flowers, and is  also known as  High Mallow, Common Mallow, Ebegumeci, Althaea rosaea, Mallards, Mauls, and French hollyhock

For centuries Blue Mallow Flowers  were laid down in front of dwellings or worn as a garland for Mayday/Beltane celebrations in England.

the flowers do not have a fragrance and nor does this, the tincture.

Blue Mallow Tincture aids and promotes spiritual healing and peace. The flowers can be incorporated into a dream pillow for soothing of nightmares or the tincture added to a tea or added to a bath to soften one’s character. A very becoming and pleasing Venus or Dark of the Moon ink can be made from Blue Mallow Flowers.

The flowers which have more mucilage than the leaves and the tincture from which  is very good mixed with eucalyptus in a sweetened tea for coughs or simmered with some honey to make a gargle for sore throat. It was once considered a remedy for epilepsy (“falling sickness”).