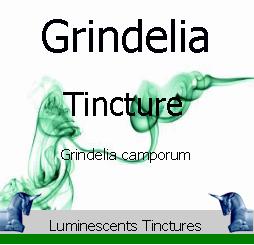 Grindelia (Grindelia camporum) from which this tincture is made is usually harvested when the entire crop is in full bloom during the summer months. It is also known as Curly-Top Gumweed or Curlycup Gumweed

The herb can be used fresh ground into an herbal poultice for topical problems. The dried herb is also used for preparing herbal infusions, tincture and other remedies. The leaves and the flowering stems of the grindelia are the parts used in the preparation of the homeopathic remedy.

It is considered to be valuable in dealing with cases of bronchial asthma. It is also effective in treating respiratory impediments caused by phlegm induced obstruction in the airways.

Grindelia is anti-spasmodic as well as an expectorant. the latter property being the one it is most known for. A remedial infusion made from the herb has a relaxing effect on the muscles lining the smaller bronchial passages and helps in clearing congesting mucus in the respiratory passages on the pulmonary system.

The herb is also additionally believed to desensitise the nerve endings found in the bronchial tree and in helping slow the heart beat rate – this action is thoought to lead to easier breathing for the affected individual.

Conditions such as whooping cough, hay fever, and cystitis have also been treated using the herb. The speed of healing in the skin following physical irritation and burns is also boosted by topical application of a poultice made from it.

The compounds present in these parts of the herb also induce an anti-inflammatory action, as well as being expectorant and sedative in action.

The use of the grindelia herb can produce some side effects, which is the reason for it being contraindicated for some patients affected by specific disorders in the kidney or the heart. Different parts of the grindelia plant have different properties, dried leaves and the flowering tops possess anti-spasmodic as well as anti-asthmatic effects.

Active compounds in the plant are excreted via the kidneys; a side effect is that this excretion can at times induce signs of renal irritation in the person using the herb.