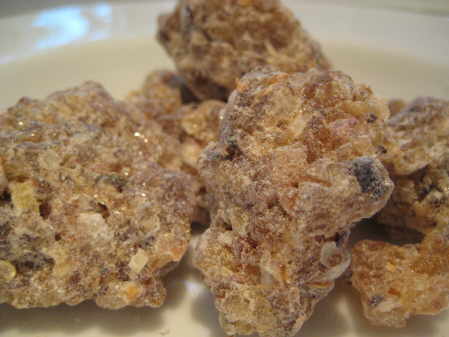 Frankincense Maydi is considered by many to be the finest of all the Frankincense in the world – from the botanically named Boswellia frereana species of Somalia. It is quite unique, much treasured and extremely rare and difficult to get hold of. Most of the production is snapped up by the Saudi Arabian merchants – up to 95% and the remaining 5% generally goes to the largest and richest Parisian perfume houses.

The tree is known as Yagcar by the Somalis, Yegaar in Yemen and Luban Lamiin Arabic.

Frankincense Maydi is considered to be superior to other frankincense varieties by the Somalis and Arabians. Historically over 90% of its annual yield is imported by Saudi Arabia where it is highly regarded as a prestigious chewing gum amongst other uses such as purification. As a matter of interest Frankincense gum is very good for gum health.

Frankincense Maydi is found only on the steep vertical slopes of coastal Northern Somalia.

Similar to other Frankincense trees, Boswellia frereana favours soil rich in limestone and it thrives in the hot climate of Somalia, but unlike other species it requires good access to water and rainfall. Attempts have been made to introduce the species to Kenya and Southern Yemen with little success so far.

The top four grades have up till now exclusively been exported to Saudi Arabia for chewing gum and the remaining grades are exported to China for use in medicine and France, Germany and England for use as incense in religious ceremonies.

This product is a blend of the four top grades usually found only in Saudi Arabia. It has a deeper, more balsamic and resinous aroma than the popular Boswellia sacra and more common Boswellia carterii species but with its own wonderful light and lively top notes.