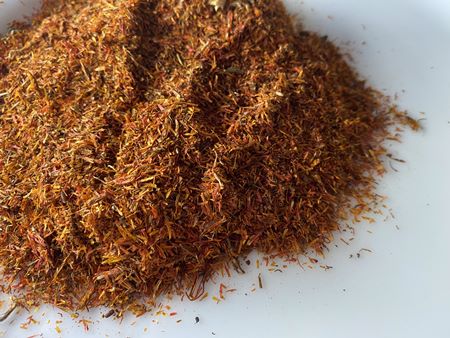 Safflower from which False Saffron is obtained is a fast growing, erect, winter/spring-growing annual herb, that resembles a thistle It is also known as Kusum Flower Petals

Originating from a leaf rosette emerges a branched central stem (also referred to as terminal stem), when day length and temperature increase. The main shoot reaches heights of 30–150 cm

In Ayurevda, as a tea it is used to treat fever, tumors, coughs, breathing problems, clotting conditions, pain, heart disease, chest pain, and traumatic injuries. Some people use it for inducing sweating; and as a laxative, stimulant, antiperspirant, and expectorant to help loosen phlegm

It has sweet earthy flavour when used in cooking; some saying that it resembles the taste of tobacco with a slight chocolate undertone but it fades in the cooking and the taste is less strong than the smell. It is sometimes passed off by the unscrupulous as real saffron and is indeed used instead of Saffron as a cheaper alternative, however, the result is not at all similar. it makes a lovely tea however. It is well worth the trouble of trying though

It is used as a fabric dye and food colourant