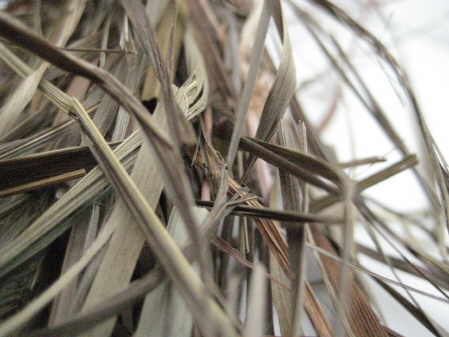 Also known as Manna grass, Mary’s Grass or Vanilla Grass, and as Holy Grass in the United Kingdom. In Poland it is sometimes know as Bison Grass.

Sweetgrass (Hierochloe odorata) is a very hardy perennial, able to grow in environs right up to the Arctic Circle. Its leaves do not have rigid stems, so only grow to about 20 cm (7.9 in) in height, and then the leaves grow outward horizontally by late summer to 100 cm (39 in) long or more.

It is also known as Manna grass, Mary’s Grass or Vanilla Grass, and as Holy Grass in the United Kingdom. In Poland it is sometimes know as Bison Grass.

It is an extremely aromatic herb which is native to northern Eurasia and North America. It is used in herbal medicine and in the production of distilled beverages ( Żubrówka, Wisent).

The herb owes its distinctive vanillery sweet scent to the presence of coumarin.

There are several strains of sweetgrass — a regular strain that can be harvested once or twice a year, and a naturally occurring polyploid strain, which is much faster growing and can be harvested three to five times a year.

Two of the chemicals found in sweetgrass, phytol and coumarin, are considered to be good at repelling mosquitoes.

Sweetgrass owes its specific and distinctive aroma to the presence of coumarin.

It has a sweet, long-lasting aroma that is even stronger when the grass has been harvested and dried and is then moistened or burned.

The plant is harvested by cutting it in early to late summer at the length desired. If harvested after the first frost the herb has little or no scent and is less desirable for basketry. Basketweavers sun-dry cut Sweetgrass until it is dry and brittle. The brittle form of sweet grass must be soaked in warm water until it becomes pliable. The pliable grass is typically braided into thick threads and then redried for use.

Sweetgrass was once strewn before church doors on Saints’ days in northern parts of Europe, (and the tradition still continues in many a rural community) presumably because of the sweet smell that arose when it was trodden on. It was once used in France to flavour sweets , tobacco, soft drinks, and perfumes.

In Europe, the species Hierochloe alpina is frequently substituted or used interchangeably.

In Russia, it was used to flavour tea. It is still used in flavoured vodka, the most notable example being Polish Żubrówka.

Sweet grass is widely used by North American indigenous peoples from many different Nations. Among many of the Plains Indians it is considered one of the “four sacred medicines”.

Many Native tribes in North America use Sweetgrass in prayer, smudging or purifying ceremonies and consider it a sacred plant. It is usually braided, dried, and burned. Sweetgrass braids smolder and doesn’t produce an open flame when burned. Just as the sweet scent of this natural grass is attractive and pleasing to people, so is it attractive to good spirits. Sweetgrass is often burned at the beginning of a prayer or ceremony to attract positive energies.

Sweetgrass is used to “smudge”; the smoke from burning Sweetgrass is fanned on people, objects or areas. Individuals smudge themselves with the smoke, washing the eyes, ears, heart and body. Sweetgrass is one of the four medicines which comprise a group of healing plants used by the people in Anishinabe, Bode’wad mi, and Odawa societies. The other three are Tobacco (Nicotiana rustica, Nicotiana tabacum), Cedar (Thuja plicata, Libocedrus decurrens), and Sage (Salvia apiana, Artemisia tridentata).

Sweetgrass is burnt after smudging with Sage (Salvia apiana), to welcome in good influences after the bad had been driven out.