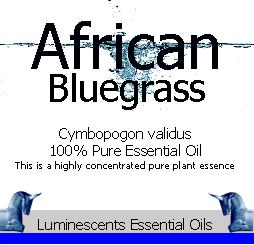 SCENT: African Bluegrass Essential Oil has a sweet, lemony/grass smell with slightly herbaceous base notes. It is earthy while remaining light and fresh.

African Bluegrass is a fast growing and invasive aromatic gray-green grass, with a unique lemon odour native to South Africa. It is sometimes known by its more common names of Giant Turpentine Grass, Tambookie Grass, or Tambuti.

If you wish to grow it as an ornamental oj your garden then do so in pot (even if you subsequently bury the pot) as it is so invasive that if you don’t restrict its roots you WILL end up regretting it.

Traditional and Emotional uses reportedly include:- It is a beneficial astringent and a well known and recorded anti-fungal agent, as well as being anti-viral. It is now popularly used in many mens preparations (colognes and men’s toiletries) and is also used as a soothing foot bath.

The Oil Blends Well With:

African Bluegrass works very well with oils from the citrus family, as well as those with soft floral notes but be careful in your blending as it can be overpowering – more so than you would think by just sampling from the bottle.

Cymbopogon, comes from the Greek ‘ kumb’ meaning nacelle (boat) and ‘ pogon’ meaning bores or beard. It is said that it appeared in the composition of holy oil (olive oil, grooves, myrrh and citronella) As such this particular oil is associated with holy-ness in South Africa.

Whilst common in South Africa it is difficult to obtain in the West. It has a long association with the perfumery industry however because of its more complex set or aromas than other cymbopogon species.

CAUTIONS:The Essential Oil may cause skin irritation in some individuals. Contact with eyes should also be avoided.