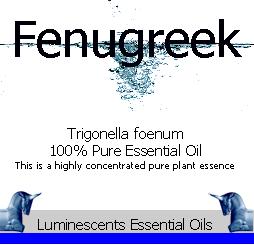 SCENT: Fenugreek essential oil has a bitter and aromatic scent.

Fenugreek belongs to the family Fabaceae. It is used both as an herb (the leaves) and as a spice (the seed) and is cultivated worldwide as a semi-arid crop. Fenugreek essential oil made from the plant is usually extracted by steam distillation of the seeds.

The 3 mm rhombic yellow to amber colored fenugreek seed, commonly called Methi is frequently used in the preparation of pickles, curry powders and pastes, and is often encountered in the cuisine of the Indian subcontinent. The young leaves and sprouts of fenugreek are eaten as greens and the fresh or dried leaves are used to flavour other dishes. The dried leaves (kasuri methi) have a bitter taste and a strong characteristic smell.

It has no known aromatherapy associations but is rich in saponins such as diosgenin, yamogenin, gitogenin, tigogenin, and neotigogens. alkaloids such as choline and trigonelline. Fenugreek oil is mainly used as digestive aid. It is ideal for treating sinus, lung congestion, reduces inflammation and fights infection. It is widely used as a galactagogue (milk producing agent) by nursing mothers to increase inadequate breast milk supply. It has also been used (to what effect is not documented as far as we can tell) to increase breast size and is largely a matter of tradition.

Fenugreek is an ancient spice, although currently not so much known in the West; it has been grown as a medicinal plant in Europe during the Middle Ages. In toasted fenugreek seeds, pyrazines are formed as the main flavour compounds