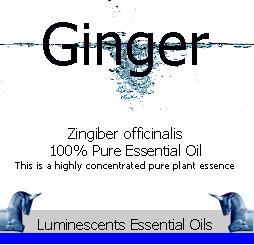 SCENT: Ginger essential oil has a warm, spicy, woody scent with a hint of lemon and pepper

Zingiber officinalis from which Ginger Essential Oil is distilled is a perennial herb and grows to about 3 – 4 feet high. It has a characteristic thick spreading tuberous rhizome. It belongs to the same family as Turmeric, Galangal and Cardamom.

Ginger oil is believed by aromatherapists to be useful for colds and flu, nausea (motion sickness, morning sickness) muscle aches (particularly the back), circulation issues and arthritic pain. It also has warming properties that help to combat loneliness, and depression. Ginger is also viewed as an aphrodisiac based on its energizing properties.

Ginger blends well with Bergamot, Sandalwood, Ylang-Ylang, most Citrus oils, and most other spice oils.

The plant is said to originate from India, China and Java, but is also native to Africa and the West Indies. It is believed that Ginger was brought to Europe between the 10th and 15th century as both a condiment and spice. It has been used for medicinal purposes since the ancient times; it is recorded specifically in both Sanskrit and Chinese texts. It is also mentioned in literature from the Greeks, Romans, and Arabians. The Romans had a lucrative importation trade with Ginger is the 1st Century AD.

Ginger can irritate sensitive skin and is photo-toxic. Sun exposure is to be avoided after application