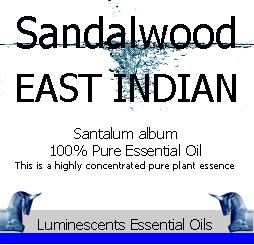 SCENT: Sandalwood East Indian essential oil is sweet, rich, woody, exotic and lingering. oriental, luxurious, and balsamic with deep & soft aroma. Be aware, however, All Sandalwoods fail to impress until they reach body temperature when the luxuriant fragrance is all too evident.

Sandalwood East Indian  essential oil, The queen of the sandalwoods, is a small tree that grows primarily in India. The wood of its stem, which grows from 20 to 30 feet high, is heavy and straight-grained and varies in colour from white, when young, to yellow or orange when older. The tree has oval leaves which are covered with a whitish bloom; its small flowers, varying in colour, grow in numerous clusters.

Sandalwood East Indian is now only being used for the distillation of oil whereas it used to be used in embalming but the principal reason for this is the over-harvesting of the tree coupled with the 30 year period required for the regeneration. As with all of our oils, we acquire our oils ethically. In this case it is through State sponsored auctions in India.

This particular species IS on The CITES registered endangered species and is restricted as a result.

It is currently endangered and consequently very expensive. Although all sandalwood trees in India are government-owned and their harvest is strictly controlled, many trees are illegally cut down and smuggled out of the country by local gangs. Sandal essential oil prices have risen by up to $1500-2500 per kg per year in the last 5 years. Some countries regard the sandal oil trade as ecologically harmful because it encourages the overharvesting of sandalwood trees.

In Buddhism, sandalwoods are considered to be of the Padma (lotus) group and attributed to the Bodhisattva Amitabha. Sandalwood scent is believed to transform one’s desires and maintain a person’s alertness while in meditation.

Sandalwood, along with agarwood, is the most popular and commonly used incense material by the Chinese and Japanese in worship and various ceremonies.