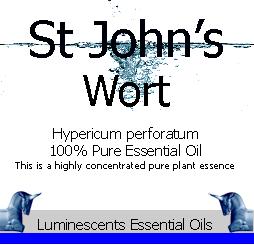 St John’s Wort is named after Saint John for being the king of healers. “Wort” or in old English wyrt (word), meaning the root of a plant and also indicates that this plant is considered seriously as a healing agent.

Now, many centuries later and through the advances of science, herbalists have discovered that it was the hypericin constituent that not only coloured the oil, but was the principal reason for the general healing effect of the plant.

This last hundred years has shown us that hypericin is highly antiviral, especially to the coxsackie, varicella-zoster, and herpes-zoster viral strains.

These virulent virus are responsible for chicken pox, hand, foot and mouth, herpes simplex, and shingles.

The essential oil of St John’s Wort is, and has always been, regarded as precious. As the true oil is slightly red in hue, (the red indicates the hypericin constituent is present), this precious oil was cherished, kept primarily to anoint Kings, Cardinals, and Popes.

St John’s Wort may cause increased sensitivity to sunlight. Other side effects can include anxiety, dry mouth, dizziness, gastrointestinal symptoms, fatigue, headache, or sexual dysfunction.

Research shows that St John’s Wort interacts with some drugs. The herb affects the way the body processes or breaks down many drugs; in some cases, it may speed or slow a drug’s breakdown.

When combined with certain antidepressants, St. John’s Wort may increase side effects such as nausea, anxiety, headache, and confusion.

St John’s wort is not a proven therapy for depression. If depression is not adequately treated, it can become severe. Anyone who may have depression should see a health care provider. There are effective proven therapies available.