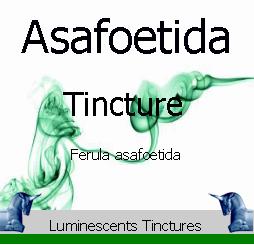 Asafoetida Tincture (Ferula asafoetida) made from the gum is also known as Devil’s Dung, Stinking Gum, Asant, Food of the Gods, Hing  and Giant Fennel.

It is a species of Ferula native to Iran but now naturalised ealsewhere in the middle east. It is a herbaceous perennial plant growing to 2 m tall, with stout, hollow, somewhat succulent stems 5-8 cm diameter at the base of the plant. The leaves are 30-40 cm long, tripinnate or even more finely divided, with a stout basal sheath clasping the stem. The flowers are yellow, produced in large compound umbels.

The gum itself has an odour that is so strong that it must be stored in airtight containers; otherwise the aroma, which is nauseating in quantities, will contaminate other spices stored nearby. However, its smell becomes much milder in cooking and presents an onion-like taste. Some claim that the use of Asafoetida in a marinade or coating for fried fish eliminates the strong smell usually left behind after frying. In India, it is used especially by the trader caste of the Hindus and by adherents of Jainism, who are not allowed to eat onions. It is mainly grown in Iran, Afghanistan and Kashmir.

The tincture is most commonly used as a digestive aid.

A folk tradition remedy for children’s colds: it is mixed into a foul-smelling paste and hung in a bag around the afflicted child’s neck. An “asfiddity bag” around the neck was a common preventative for colds and flu in West Virginia in the early 1900’s. The tincture is still used today to combat the common cold especially in juveniles.

In Thailand it is used to aid babies’ digestion and is smeared on the child’s stomach in an alcohol tincture known as “mahahing”. John C Duval reported in 1936 that the odour of “assfoetida” is attractive to the wolf, a matter of common knowledge, he says, along the Texas/Mexican border.