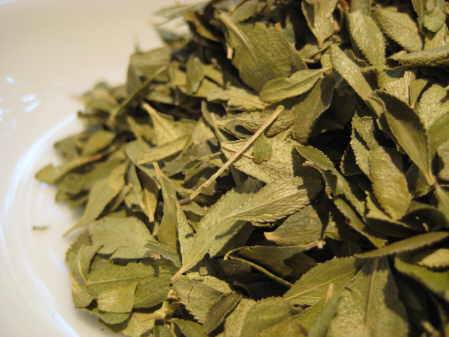 The herb will probably increase the frequency of urination. It is hepatoxic so may irritate the liver and its function. It can increase menstrual flow and should not be used at all by pregnant women as it is a uterine stimulant and may risk miscarriage. It may cause nausea ( take on a full stomach to lessen the risk ) but also may cause skin sensitivity, itchiness and respiratory discomfort. Any allergic reaction and you should seek medical attention immediately.

Buchu Leaves (Barosma Betulina) are harvested whilst the plant is in flower and are conspicuously marked with oil glands appearing as pellucid spots. Buchu leaves have a strong odour, resembling pennyroyal, and a corresponding taste. The odour and taste are strongly aromatic, mint-like pungent and very bitter.

It is usually taken as a tea or by steeping the herb in brandy to make what is referred to as Buchu vinegar.